Teresa Turnbull is a veteran runner with 20+ marathons (coming up on the big 2-5!) and several half marathons and other race distances on her accomplishment list.  She spent nine years in the Army, getting her in ‘military fitness’ shape and has been running ever since.  Teresa pioneered the Dublin LifeTime Fitness Run Club where she coached and trained runners for several years.  She has also run with Columbus Running Company and is now on the MIT [Marathoners in Training] coaching staff, leading the 10 minute pace group [P10s].  Tt or ‘Coach’ as we call her, has inspired countless runners, new and veteran, to complete races of varying distances.  When she is not running, she can be found at her ‘day job’ – a staff accountant for a local CPA firm.

We met Teresa for coffee [Starbucks in Historic Dublin, of course] and here is what she had to say…

How did you get into distance running?

Between the Army and soccer, I have always had a running background.  My first distance race was in 2004, the inaugural Cap City Half. I got my very first 1/2 training schedule from Jenny Hadfield. I loved the half and decided to train for Anchorage Alaska’s Mayor’s Marathon. The race and finish were amazing…. my kids were there, my son ran the finish with me, cancer survivors surrounded the Lake of Hope….  it was so freeing, the best sense of accomplishment!

What is your proudest fitness achievement?

Finishing my first marathon in Alaska.  I like the half, but to run a full, you really have to dedicate yourself and want it.

PR-ing in the Detroit Marathon (2008) ranks right up there too!

Motivation for LIVING FIT:  I love distance running!  It is so freeing, so good for your soul… its very therapeutic. 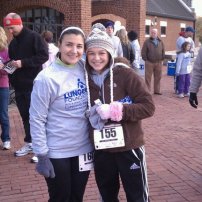